For the month of January the foundation is excited to present a writer and ‘staunch feminist’ Maryam Awaisu as the Artist of the Month for this first edition of 2018.

Maryam Awaisu is the author of the novel Burning Bright, a novel about suriving sickle cell anaemia. Burning Bright was longlisted for the $100,000 2017 NLNG Prize for Literature. Maryam lives in Kaduna, serving as an advocate for gender equality and social justice. She was a guest at the 2017 Kaduna Book and Arts Festival (KABAFEST) and the 2017 Ake Book and Arts Festival in Abeokuta.

Maryam’s writing resonates with her advocacy, she was famously quoted saying:

“Equality of sexes is to me, as unquestionable, as it is non-negotiable, and that makes me phenomenally, a staunch feminist.”

Q: If you could change the world with your work, what great feat would
you like to achieve?

Maryam: That’s easy: I’d make humanity actually humane, especially in its treatment of females. Being female has been akin to a curse for far too long.

Q: What piece of all your works are you most proud of?

Maryam: “Maybe I’m Just Going Crazy,” an unpublished short story that won me a Halloween Writing Contest when I was eighteen. I did put in my best effort, but never dreamed it would win. Maybe I will share that someday.

Q: Does language matter to you?

Maryam: Yes, it does. I’m very partial to the English language and seldom read anything that’s not written in it (anything else reads slowly, and patience isn’t my forte). I know that is restrictive and disappointing, but sadly, that’s the only language I’m comfortable with. It is however, delightful to find other languages strewn in English texts.

Q: What are you currently working on?

Maryam: A novel with the working title, “The Fair Layla.” It attempts to question the status quo of females in Northern Nigeria, and what I deem the inevitable future, if we continue on this demonic path that destroys our girls, physically and psychologically, under the hypocritical and disgustingly patriarchal guise of “culture” and laughable misrepresentations of “religion.”

Q: What are your preferred tools, time and place for creativity?

Maryam: My computer and smartphone, and an old thesaurus are my main tools. Nighttime is the only time I have, and place is my bed. Working from the bed greatly limits the amount of work I get done, of course, but I feel working at a desk or library limits my creativity (this is purely psychological, I’m convinced).

Q: What are the new frontiers of African literary culture?

Maryam: I’d say the African languages in English works, and feminism. I think it’s beautiful that African languages keep making appearances even in English works. While reading as a kid, I had to jot down words like “Dummkopf,” for the occasional trip to the internet cafe, so it’s refreshing to see an italicized”Ayé mi!” here and a “Na shiga uku” there when reading now.
As for feminism, it’s a dream come true that in different nuances, the issue of gender equality keeps coming up in virtually everything I read! Nothing could make me happier!

Q: What character from an African novel would you like most to meet and why?

Maryam: It’s the character I probably detest the most: the narcissistic and highly misogynistic Okonkwo, in Things Fall Apart.
I would like to give him a piece of my feminist mind and relish the shock and anger that would consume him on discovering that the world does not actually revolve around men. I’d love to do that while wearing a crop top, skinny jeans, nose and toe rings, and blue lipstick, and popping chewing gum.

Q: If you are given the opportunity to write your last line ever,
what would it be?

Maryam: “And for him, Providence was not only swift but also merciless, forcing regret borne of pain, humiliation, and a final admission of complete lack of worth.”
Or
“Unfairness is for the living.”
(Whichever fits “line” better)

Q: How do you think we can trigger creativity in children?

Maryam: By encouraging them to tell and/or write stories of things that actually excite them. I don’t believe that anyone ever enjoys those tedious topics-in-a-box that restrict our minds by number of words and contexts. Interest is key, but can never be universal, so they should express the things they love in the ways they love.

Q: If you meet your 10 year old self, what writerly advice would you give her?

Maryam: I would tell her to keep the manuscript she was writing (which she lost after completion) and write about her pain and challenges, even if only to tear them up right after. I believe that could’ve salvaged her sanity just a little bit. Writing honestly and truly IS purgative, whether or not done for an audience. 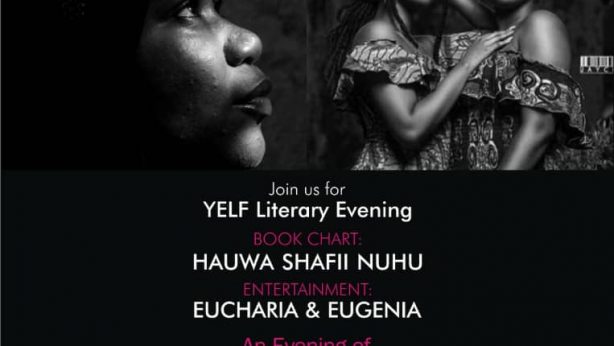 Yasmin El-Rufai Foundation invites you to this month's Literary Evening...

It's that time of the Month again! YELF presents its...