The essay explores the genesis of the canon of writing known as the Adabin Kasuwan Kano or Kano Market Literature in northern Nigeria by women, as well as the reasons that propelled these women to write.

Moderator: What was your initial reaction to the essay? Was it as expected or it exceeded your expectation?

Namse: I am glad that the writer highlighted the fact that feminism is not a recent development in Northern Nigeria.

Maryam: Well, for me it exceeded my expectation. This is because after reading the entire article, I viewed feminism from a different perspective, and I got exposed to a wider spectrum on the subject.

Moderator: I am glad you find it educating. Many people see feminism as something alien and something that a Muslim woman from northern Nigeria should stay far away from. What are your thoughts?

Aliyu Tanimu: I really enjoyed the write-up. I am glad it highlighted the issue of patriarchy. Cultural stereotypes are why women avoid working on large or commercial fishing vessels (for example). I also believe that gender equality will be one of the most powerful enablers of economic growth and human development.

Moderator:  Feminism is a topic that seems to rile a lot of people, especially men. Those of us who were at the last KABAFEST (Kaduna Book and Arts Festival) will recall that this subject engendered a heated argument. What do you think about feminism? Do you agree with the writer’s opinion as described in the essay?

Aliyu Tanimu: Let us face it, you cannot make omelette without cracking a few eggs. In this case, the eggs are the forms of power and privilege men have traditionally enjoyed. In the past, we men only had to compete with half of humanity for most jobs. Now, men have to compete with all of humanity. At night, men got to relax, go out with friends, or pursue careers, sports or hobbies while their wives (even if they work outside the home) do most of the childcare and domestic work. But now, men are expected to do their fair share. In other words, some men are afraid of feminism because it challenges the status quo ante; their superiority mentality and undue privileges associated with the male gender.

Moderator: What do you know about the genre of classified writing such as Adabin Kasuwan Kano? Have you read any of such books? What is your opinion?

Namse: I didnt know much about it. I wish I could get English translations of the works (English is sadly the only language I can read).

Moderator: Some have been translated into English like Balaraba Ramat’s ‘Alhaki Kwikwiyo Ne’ as ‘Sin is a Puppy that Follows you Home’.

Najib: I have heard about some of these books but I have never fully read any. My cousin introduced me to a book “Runguntsumi” which had several parts. At the time, I had not developed a good reading habit, but I know those books have many titillating chapters.

Moderator: Most early female writers received backlash from clerics and politicians. They were marginalized, called names and their books burnt. What do you think caused such disdain towards women armed only with pen, paper and their imagination?

Habiba Abdulkarim: Psychological insecurity and the fear of being exposed. The pen they say, is mightier than the sword. They felt the only way they could prevent the truth from seeing the light of the day was by bullying those women into silence and demanding total submission.

Halima: Patriarchy has sold a narrative for many years. Do you think they will fold their arms and watch their houses brought down? It is not so much that some people can’t see the truth, it is more about being comfortable with a situation such that they don’t wish it to change.

Maryam: To me, the reason for the backlash from those clerics and politicians is fear. Thankfully, women now know that they have a voice and they can speak for themselves. They are aware of their rights and are ready to fight for it. They also know that they have a strong heart. If they want to pursue their rights, if they want to stand firm on their feet; they can do it and that’s why they burnt their books and have continued to condemn feminism.

Moderator: …but men have argued that Muslim women have nothing to fight, as Islam has clearly given them their rights.

Maryam: Yes, Islam has given women their rights but do the men honour any of those rights, No!

Habiba Abdulkarim: I think Islam and feminism cannot sit on the same table. The rights and duties of both genders have been laid down.

Halima: I blame some religious scholars for this. They have a way of only preaching about issues that further strengthens patriarchy.

Najib: Those women challenged social conventions through their non-fiction thus, many people felt drawn to it and the themes they explored. However, my query with the essay lies in the author’s discussion on the books that were burnt and the backlashes these women received; but there was no mention of the kind of cultural shift that manifested as result of those books. Did wives start growing bigger spine? Did husbands start getting late dinners? Like what reorientation prompted such an action from the authorities? I expected to hear some cultural revolution but there was none.

I think the reason why feminism continues to grow especially in conservative communities is because men abused that power consistently, and are basically beyond reproach. Women are just fed up, it seems. As it is said, starve a dog long enough and it will have no choice but to eat you.

Moderator: I get your point that is why we are having these discussions. It is not only to appreciate the works of a writer but also critique where we feel the writer has failed. I don’t want to project my opinion on Islam and feminism. The prophet’s emphasis on the rights of women at his time in the Arabian Peninsula must have sounded radical to them.

Najib: Islam and feminism are broad topics, and to discuss them conclusively, one has to look at the range of nuances that feminism presents. What some feminists in Nigeria are fighting for is not to ‘free the nipple’ or dress indecently. Most of their agitations are about being treated with basic human dignity. Not to be stigmatized for being unmarried or divorced. Most of their agitations are well within the sphere of what Islam represents. However, when you broaden the term feminism and add it to Islam, your guess is as good as mine. And most people, especially men see it as an invasion of western ideology; an ideology that is increasingly hostile to Islam.

Moderator: Thank you Najib for this insight. To add to that, feminism is an umbrella term, it doesn’t mean that a northern Nigerian Muslim woman wants or is demanding for the same right as her counterpart in the Western world. Our realities are totally different so also are our struggles. Just that the Nigerian Muslim woman has been at the receiving end of the society, and with feminism as a tool; they’re saying ‘we’ve had enough and things have to change’.

Do you think these writings have been able to bridge the gap of gender disparity as well as empowered women and girls?

Aliyu: To a large extent yes, but more needs to be done.

Najib: Yes and no! Yes, in the fact that writings generally shape people’s thoughts and I am sure those books have impacted women by emancipating them from what they were fed, though, a revolution is yet to erupt. Women still face constraints in the pursuit of their goals. Notwithstanding, there’s a crack on the wall, maybe one day it will fall.

Moderator: I do not think the wall will erupt any time soon; men are still using religious blackmail in tying women down; depriving them from attaining financial independence. Child marriage and subjugation of women is prevalent in northern Nigeria. How did this influence the rise and development of women writers?

Najib: Experience! Like the article under review, Ramat was a child bride at the age of 13, divorced at 14 and shunned by the society at the same age. It is difficult to be economical with words after been traumatized in that manner. Many women writers connect with that; it is probably what happened to them or to someone they know. And it is just something they can’t bear or afford to keep mute and continue to suffer the consequences. This essay is a great contribution to the discourse on feminism in northern Nigeria and how it is always entangled with religion. I really like how Rahama’s first book was a form of rebuttal. It underscores how far writers go to send a message.

You can be part of our programs by donating through our website or directly to: 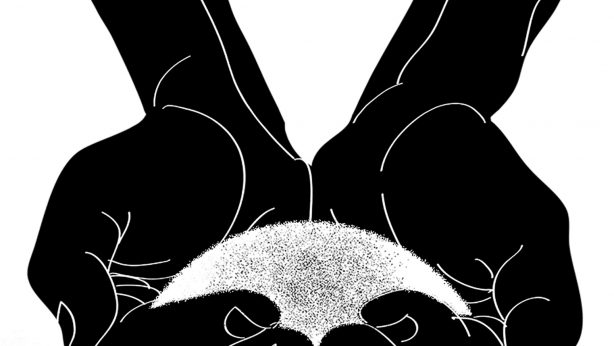 About the invited guest of this month's YELF Literary Evening. November Edition 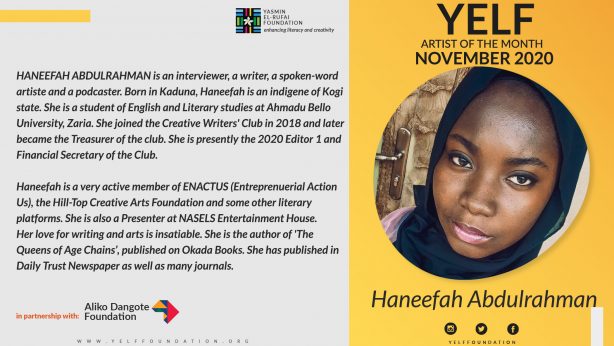 HANEEFAH ABDULRAHMAN is an interviewer, a writer, a spoken-word artiste...